» What to do » Church of Our Lady Star of the Sea 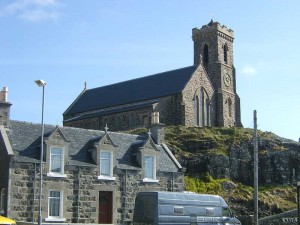 Church of Our Lady Star of the Sea stands proudly above the village of Castlebay. The church has been named to look after those who travel the sea, and represents the strong links with mariners. The church only dates back to 1886 and was designed by an architect from Oban.

The Isle of Barra is a mainly Roman Catholic island, which is significantly different to the other islands that tend towards the protestant Church of Scotland, and Free Church of Scotland. This historic religious background has an effect upon Barra’s feeling of independence from the isles to the north.

View Isle of Barra in a larger map