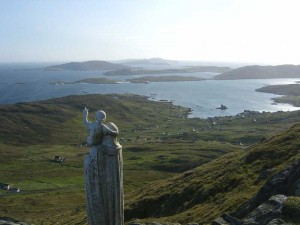 Heaval is the highest hill on Barra, at a height of 1257 feet or, 383 meters.  The views from the top are spectacular, particularly looking down towards Castlebay and the islands to the south.  One of the features of Heaval is a statue of the Madona and Child, known locally as Our Lady of the Sea.  The statue was only erected in 1954, but it looks like it has been there for centuries.

To walk up Heaval, its best to go from the car park at the top of the hill on the road leading from Barra north.

A race called the Heaval race, takes place on Barra every early July and has been going for at least the last 40 years. The race starts and finishes in Castlebay Square. Those taking part run to the top of Heaval  and back by whichever route they think is best. There is Live music in the square both before and after the race and prizes are given at the Fisherman’s Dance the following evening.